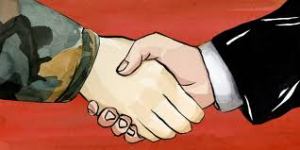 At the Rome based Friends of Syria talks, Billy Shears was able to get some exclusive insights into the tense and sophisticated negotiations between the Syrian opposition and British and American government representatives. The crux of the negotiation was around the provision of guns, finance, training and explosives by the West to the Syrian extremist opposition groups on one hand, and on the other hand how much time the Syrian opposition groups should wait, before it starts to kill westerners in suicide attacks and shootings in Europe.

Sir George Whitehall from the British Department of Foreign Affairs, ‘You see it could be seen to be frightfully silly if we give the Syrian opposition assistance to overthrow Assad, then you immediately launch an attack on a European city. So we would prefer the opposition maybe  wait six months or so, just to pretend a bit you are on our side, before doing any of this sort of infidel killing kind of thing in our cities’.

Ahmid Hussein, spokesman of the Absolutely Free Syrian Opposition Martyr Resistance Movement responds frankly, ‘Yeah OK, if you give us lots of weapons now, including really big humongous guns and lots of explosives, then maybe we can wait a while until we start killing you infidel westerners. But 6 months is out of the question, maybe 2 months’.

Retired 5 star General, W.D. Abraham a special representative of the United States Government acting as an elder statesman at the talks addresses both parties in the discussion. With astute diplomacy he navigates a constructive way forward by finding a mutually acceptable middle ground.

‘Now, now gentlemen, maybe we can come to some sort of compromise on this? Hows about we give you, the Syrian opposition the big humongous guns and explosives you want, then we find some sort of compromise on the time frame for  attacking civilians in Europe and America? Let us say that the Syrian opposition can start blowing up westerners, not 2 or 6 months after we give them to you, but hows about after 4 months? Is it a deal?’

Both parties then shake hands and a deal is done. Another positive outcome demonstrating the long term insightfulness of western governments supporting extremist opposition groups in Middle Eastern insurgencies.